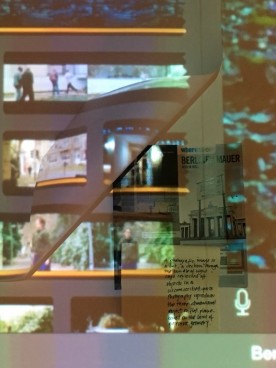 Ali Meer Azimi and Mahan Moalemi will share research materials from works in progress that look into the relationship between narratives and territories –– zones of conflict, appearance, disappearance, participation, politics, and professionalism. This double presentation brings together different fragments of narrative carried by film excerpts, found and fabricated images, screenshots, quotations and speculations.

In narrating the territory or, inevitably, territorializing the narrative, certain approaches to modeling, representational techniques, as well as forms and means of visual abstraction will be explored in tandem with one particular history or another. It could be framed in the context of ​Berliner Schule,​ or a schematic history of documentation in Contemporary Art, or the story of stolen urban statues in Tehran and their evocation of a long history of arms manufacturing.

This session will try to raise the question that when history becomes form, then what history does the abundance of formalisms amount to? What does follow rampant interfacial contacts between different historical forms? How do forms live various lifetimes? What is a formal economy of life and afterlife? Of death? So it is and it is not yet another critical discussion of Zombie Formalism in yet another expanded sense.

By experimenting with how narratives and territories come together, we set out to explore a political economy of the historical form among certain territorial representations in contemporary times. In this, we follow a set of questions including, what is a new form? What is a new story? What is a new image? What is a new territory? Or, ultimately, is the “new” a valid historical category at all? Is it any longer a valid currency for narrative, visual, or spatiotemporal exchange? Or maybe it’s just too late to ask such a question. We can decide that during the session.

This event follows a residency program as part of ​Staging a Change: Shifting Panoramas in Tehran and Berlin​, curated by Azar Mahmoudian and Solmaz Shahbazi and supported by Goethe-Institut in collaboration with BOX Freiraum and feldfünf – Projekträume im Metropolenhaus.

Ali Meer Azimi​ is an artist from Tehran. With an educational background in graphic design and computer engineering, he works in a variety of mediums, including sculpture, drawing, and writing. In his research-based artistic practice, Ali treats the cinematic form both as a medium and a material, and contemplates on the various modes of imaging in relation to the ​specular​ ​space​ of contemporary art and politics. Ali has been involved in various collective projects, including ​kaf,​ an independent artist-run initiative in Tehran (2011-2015). He is represented by O Gallery in Tehran and has shown works at Beirut Art Center (2018), Ashkal Alwan (2017), and Taxispalais Kunsthalle Tirol (2017), as well as in multiple design exhibitions and poster festivals in France (2009) and Germany (2015), among other places.

Mahan Moalemi​ is a writer and curator from Tehran. His ongoing research on the visual economy of contemporary art is an attempt to map the tokenized gestures and aesthetic norms of a professional field that, ironically or not, includes a heterogeneous range of creative and often not too creative practices. Mahan treats contemporary art both as a means and a subject matter, if not an end, in and of itself. He deploys the typical installation shot or exhibition view as a premium currency, an economic interface, for mapping the circuits of exchange and the sites of blockage between the art world and other worlds. Mahan was previously part of the team of organizers at ​kaf​, an independent artist-run initiative in Tehran (2010-2015). A recipient of the MOP Scholarship (2016), he holds a Master of Research in Curatorial/Knowledge from Goldsmiths, University of London (2017), where he co-curated The Fisher-Function​, an experiment in collective mourning, collaborative publishing, and public programming. He is co-editor of ​Ethnofuturismen​ (Merve Verlag Berlin, 2018) and his writings have appeared in ​Cabinet,​ ​Domus​, ​Spike Art Magazine​, and a number of art and literary publications in Iran.