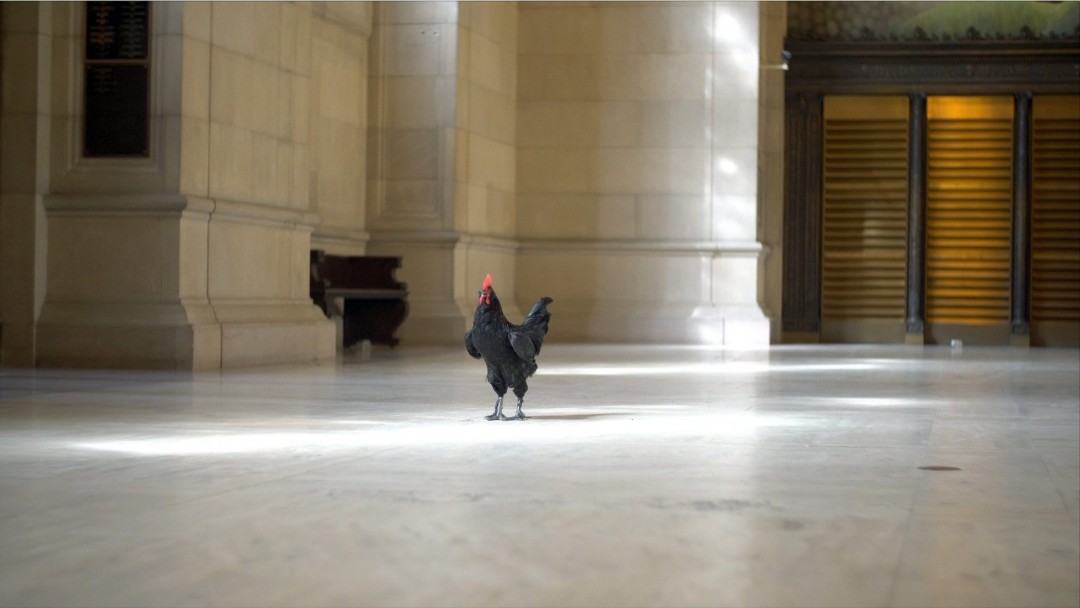 Film program with contributions by:

White Walls, a film program by EVBG, looks at city architecture and established institutions as sites of marginalization. How do bodies navigate through spaces that are clearly not meant for them? Whether the walls of museums, public institutions or urban structures―in our society, they still remain white: in the lit- eral, symbolic and structural sense. They exclude the histories of marginalized bodies or make their presence hyper-visible in order to mark them as the* non-white “other”.The selected video works raise questions about the interweaving of architecture, representation and visibility and problematize the consolidation of normative “truths” through public space structures. They critically examine the “white walls” of four specific institutions:

In James Gregory Atkinson’s “The Day I Stopped Kiss- ing my Father”, a black rooster wanders through the halls of the Detroit Public Library and looks up at the high ceiling and wall paintings depicting moments of U.S. history that were historically considered important―a seemingly exclusively white history from which BIPoC were systematically erased. The work’s title alludes to the moment of growing up, in which many young men* stop showing affection to their fathers due to internalized homophobia, and therefore reflects on postcolonial, normative notions of masculinity, power, and patriarchy.

Danielle Dean’s “Biowhite” is recorded on the premises of the Salk Institute in California, where research on skin whitening products was conducted. The video compares architect Louis Kahn’s obsession with white concrete―the most ideal and pure of all building materials―with the social desire for light skin that seems to have survived colonialism in many regions of the world. In both cases the outer shell supposedly reflects a pure, authentic inner.

In “Welcome Address” by Vika Kirchenbauer, curator and researcher Ashkan Sepahvand, who organized the exhibition “Odarodle―An Imaginary Their_Story of Nature Peoples, 1535- 2017” at the Schwules Museum Berlin in 2017, gives a welcoming speech. Having received a grant to examine the museum’s collection through a postcolonial lens, his exhibition and Kirchenbauer’s video reveal the complexity of representation politics at work. He identifies “diversity” and “multiplicity” as concepts that can be transformed into a kind of symbolic currency when museums publicly seek to perform self-reflection and political correctness.

In “A Short Video About Tate Modern” Emma Wolukau-Wanambwa reports on her marginalizing experiences and observations in the unusually white interior of the Tate Modern, an art museum in London. Who becomes visible under which conditions? And who will remain invisible? The constant feeling of hyper-visibility with which Wolukau-Wanambwas was confronted in the museum’s white exhibition space, and the absurdity of the permanent gaze are confronted with critical interventions within the museum architecture.

EVBG (founded 2015 in Berlin) is a project by curators Marie Sophie Beckmann and Julie Gaspard that is dedicated to curious excursions into the present: feminism, representation and expectation, avocado toast and hashtags. EVBG is open for exploration, development and refinement. As a curatorial collective they have organized exhibitions, among others in: Efremidis Gallery, Berlin (2019); uqbar, Berlin (2019); Project Space Festival Berlin (2019); Salon Gallery, Berlin (2019); PSM Gallery, Berlin (2018). In 2019, EVBG was awarded the Preis für künstlerische Projekträume und -initiativen (prize for artistic project spaces and initiatives).

JAMES GREGORY ATKINSON (*1981 in Bad Nauheim, Germany) is a German-American artist and lives in New York. He studied photography and design at the Lette-Verein, Berlin (2010), graduated from the Cooper Union School of Art in New York (2015) and completed his studies at the Städelschule, Staatliche Hochschule für Bildende Künste in Frankfurt with a master student (2016). He received artist residencies from the Villa Aurora, Los Angeles (2016) and the Jan Van Eyck Akademie, Maastricht (2017) and a studio grant from the Hessian Cultural Foundation (2018-2019). His works have been exhibited in: Kunstraum München e.V. (2018); MMK Museum für Moderne Kunst, Frankfurt am Main (2016); Ludlow 38, New York (2015).

DANIELLE DEAN (*1982 in Huntsville, Alabama/USA) is an interdisciplinary artist who works on the construction of ethnic, social and gender-specific role models by examining narratives found in news, advertising and popular culture. She focuses on the underlying power structures that lead to the manipulation of thoughts, feelings and social relationships. Dean received her MFA from the California Institute of the Arts and is a graduate of the Whitney Independent Study Program and the Skowhegan School of Painting and Sculpture. Her work has been presented among others at: Ludwig Forum Aachen (Solo, 2019); Museum of Contemporary Art Detroit (Solo, 2018); Bazar at 47 Canal, New York (Solo, 2018); Cubitt Gallery, London (2018); Stedelijk Museum Amsterdam (2018); Lafayette Anticipation, Paris (2018), Studio Museum in Harlem, New York (Solo, 2015).

VIKA KIRCHENBAUER (*1983 in Berlin) is an artist, writer and music producer in Berlin. Her work explores the representations of people read as marginalized and how they influence different forms of visibility and invisibility. Her work has already been exhibited at, among others, the following venues: Whitechapel Gallery London (2020); Kunsthal Charlottenborg Copenhagen (2019); Neuer Berliner Kunstverein (2016).

EVBG: Taking back the streets

“Anarco Feminist Ideals With Indigena Understandings and an Urban/Hood Mentality” is the credo of the Ovarian Psyco-Cycle Brigade since 2010. The documentary by Joanna Sokolowski and Kate Trumbull-LaValle gives an insight into the life of a group of Womxn of Color. Together they cycle through the streets of Los Angeles’ East Side to reclaim the spaces in which they are made to feel like outsiders*: “Our work was born from a very real need to affirm our existence, reclaim our agency, engaging collectively in efforts to propagate rage and rebellion.

EVBG is a curatorial project by Marie Sophie Beckmann and Julie Gaspard. During the festival they present a film program consisting of two parts, each of which examines architectures of exclusion.